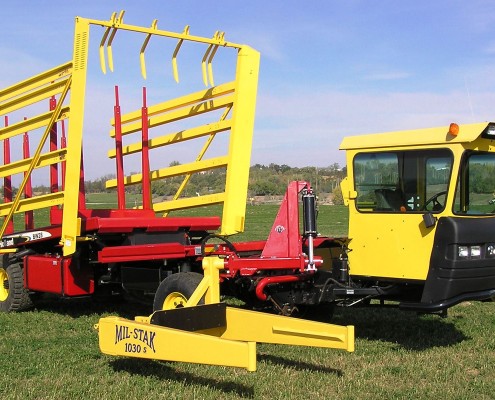 The Mil-Stak large bale loader was invented and patented by a custom hay stacking operator.  His goal was to design a fast, simple method to load and stack large square bales with his New Holland® bale wagon and yet retain the ability to quickly switch back to small bale loading.

By utilizing your bale wagons existing controls, the operator can quickly and easily load a tight, uniform stack of large square bales. With the Mil-Stak clamp installed on a New Holland® BW series or newer wagon the stacking process is fully automated. Simply drive to a bale, activate the clamp squeeze function, and the computer will take over. After the clamp has loaded the bale on the first table, it will return the clamp to the ground while you focus on driving to the next bale. Stack patterns can be set for many different stack patterns in both 3x3 and 3x4 bale sizes.

Once the initial install is done, you will be able to switch between large and small bale mode in less than half an hour by simply removing a few bolts bolts and hydraulic quick couplings. On the BW28/BW38 and H9880/H9870 wagons the New Holland® computer will automatically recognize when the Mil-Stak clamp is attached and enable the large bale stacking functions and stack patterns.

Converting your stack wagon from small bales to big bales used to be a big decision for many hay producers because once it was done, it was costly and difficult to undo. Mil-Stak has taken great care to design a large bale conversion kit that does not damage your New Holland® bale wagon. Everything is either bolted on or plugged in. There is no welding on your bale wagon and no wires cut.  Starting in 2009, New Holland® H series wagons are factory ready for the Mil-Stak clamp. Initial installation of the clamp may be done by Mil-Stak or one of our experienced dealers. If you are interested in installing one of our clamps yourself, please see our downloads page for installation manuals.

The Mil-Stak bale loader clamp comes in three different models to accommodate either 3x3 bales, 3x4 bales, or an adjustable model that handles both. Our simple, reliable design fits any size of operation from the family farm to the large commercial operator.

Each clamp comes with a complete mounting kit which includes everything you need to start loading and stacking big bales with your New Holland® self propelled bale wagon. 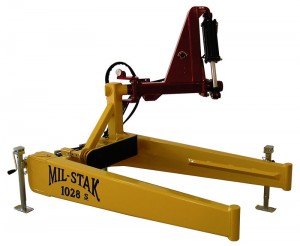 The model 1028-s is designed with a solid, non-adjustable frame to fit 3x3 bales and includes a two spring cushion bumper. 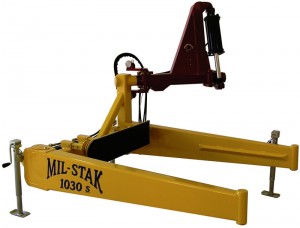 The model 1030-s is designed with a solid, nonadjustable frame to fit 3x4 bales and includes a three spring cushion bumper. 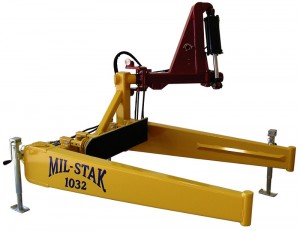 The model 1032 is designed with an adjustable frame, allowing it to handle 3x3 and 3x4 bales. It comes with a two spring and a three spring cushion bumper. By removing four bolts and two pins the clamp can be switched between 3x3 and 3x4 bale sizes in less than fifteen minutes.

The chart below is a complete list of the New Holland® bale wagons which Mil-Stak clamps are compatible with and how many big bales each wagon can carry per load.

1075's and 1085's are limited to twelve 3x3's or eight 3x4's per load because their load racks are shorter than the other New Holland® bale wagons. The shorter load rack only allows you to make a 4 high stack of either 3x3's or 3x4's.

Mil-Stak also does not recommend loading or hauling 4x4 bales with a New Holland® self propelled bale wagon. The Mil-Stak clamp itself can handle 4x4 bales but the hydraulic cylinder which lifts the second table does not have enough force to lift the second table and transfer two 4x4's to the load rack.

Mil-Stak bale clamps are not compatible with any bale wagon that is not listed in the chart above. This includes the New Holland ® 1046, 1048, 1049, or any of the New Holland® pull type bale wagons.

No. Just as when you're loading small bales, you do not have to stop at each bale before or while loading it. We have designed and built our clamps strong enough to withstand tens of thousands of impacts with 3x3's and 3x4's at speeds of up to 5 mph!

How fast can I go when making contact with bales?

We recommend that you do not travel any faster than 5 mph when hitting 3x3's and 3x4's. Once you have made contact with the bale and it's off the ground, you can speed up to decrease the travel time between bales.

Will a Mil-Stak Clamp void my New Holland warranty?

How long does it take to switch between big bales and small bales?

The first few times you switch between big bales and small bales, it may take 45 minutes to an hour. After you get the hang of it, you can plan on about half an hour to make the switch.

Can I stack 4x4’s with a New Holland self propelled?

We do not recommend stacking 4x4's with a New Holland self propelled bale wagon and a Mil-Stak Clamp. While our clamp can handle the additional weight of 4x4's, the second table cylinder on the New Holland wagon does not have enough force to efficiently lift 4x4's and transfer them to the load rack.

As of 2015 we do not have access to various components needed to mount our clamps to these older wagons.